Over the last three years, Pfizer has certainly stood out as the kingpin of Big Pharma – an industry which managed to rebrand itself as the saviour of humanity during COVID-19 – while orchestrating perhaps the most reprehensible global human trials with experimental drugs, the COVID-19 ‘vaccines’, to date. This article details Pfizer’s rap sheet. A long, but not exhaustive, list of payouts and settlements between 1992 and 2016 for felonies ranging from defrauding the federal government, to promoting drugs for unapproved use, and withholding critical information about the side-effects of drugs. As Dr Duncan Du Bois stated in an email to BizNews with reference to this article, “Based on the above, saying YES to the Pfizer jab or booster is a no-brainer.” This article first appeared on The Defender. – Nadya Swart


Pfizer Has a Long History of Fraud, Corruption and Using Children as Human Guinea Pigs​

Pfizer agreed that it aggressively marketed the epilepsy drug illicitly for unrelated conditions, including bipolar disorder, pain, migraine headaches and drug and alcohol withdrawal. Pfizer’s tactics included planting company operatives in the audience at medical education events and bribing doctors with luxury trips.
Pfizer discontinued its marketing program for Neurontin in 2004 after the drug became available as a generic. That same year, the company paid $430 million to settle federal criminal and civil claims that one of its subsidiaries had promoted the drug for unapproved uses. 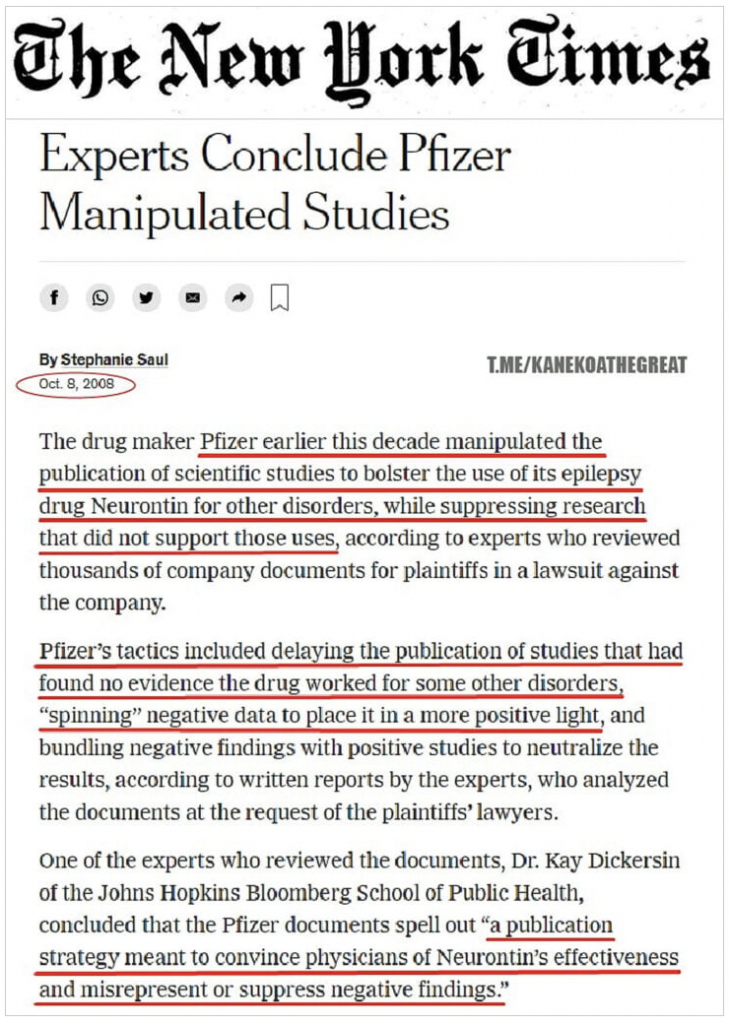 The government alleged that Pfizer had paid kickbacks to compliant doctors and also promoted three other drugs illegally: the antipsychotic Geodon, an antibiotic Zyvox and the antiepileptic drug Lyrica.
Senior FDA officials had long stood behind the drug despite a mounting death toll and Rezulin’s absence of proven life-saving benefits. The position of the FDA officials stood in contrast to their counterparts in Britain, where Rezulin was removed effectively on Dec. 1, 1997.
Pfizer also paid $15.3 million to 250 academic medical centres and other research groups for clinical trials in the same period. The disclosures were required by an agreement that the company signed to settle a federal investigation into the illegal promotion of drugs for off-label uses. 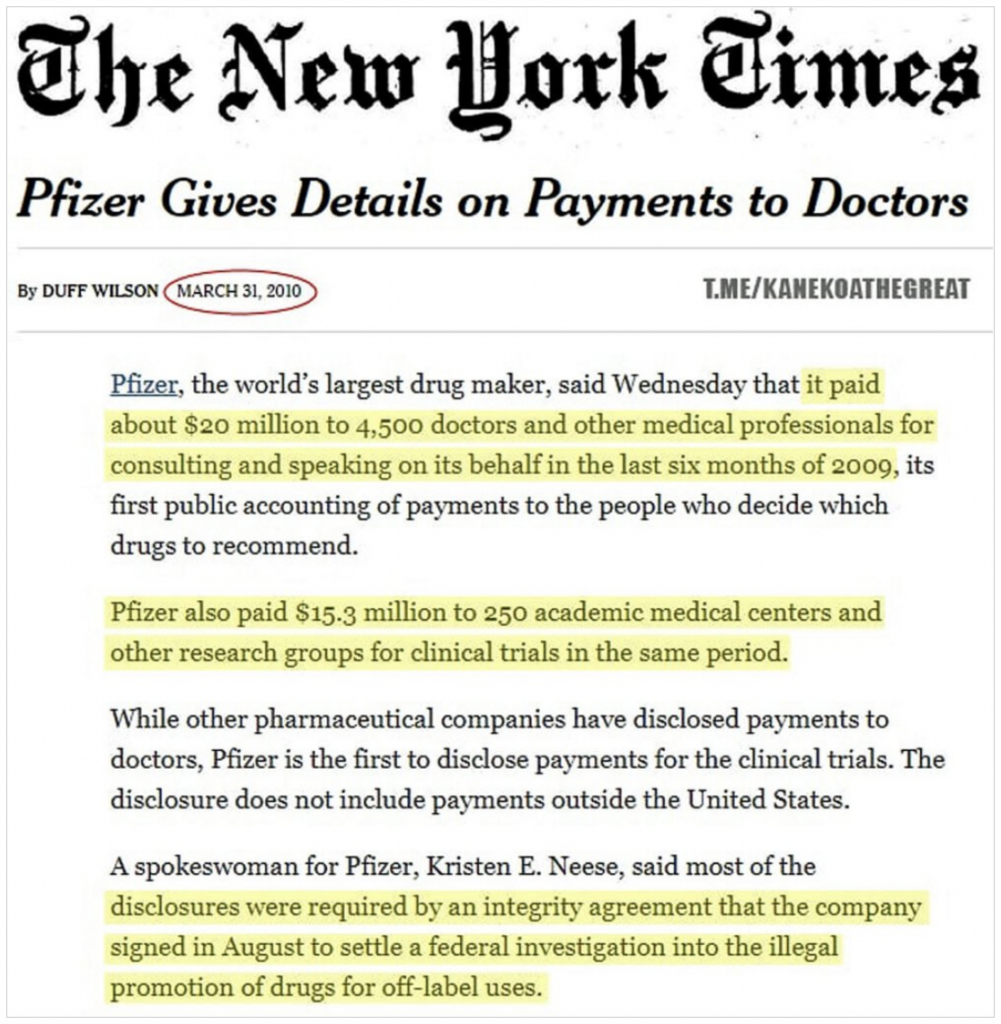 In 2009, Pfizer agreed to pay $75 million to the families harmed during the 1996 drug trial. Still, the cables suggest that the US drug giant was looking for blackmail to get the Nigerian attorney general to drop the $6 billion federal suit against Pfizer.
The leaks showed that Pfizer’s investigators were passing ‘damaging’ information to the local media and threatening the attorney general that much more damaging information would come out if he did not drop the suit. The $6 billion lawsuit was dropped in 2009.
According to the Securities and Exchange Commission, employees of Pfizer’s subsidiaries authorised and made cash payments and provided other incentives to bribe government doctors to utilise Pfizer products.
Several plaintiffs were awarded tens of millions of dollars, including punitive damages for the drug maker’s actions in withholding information about the risk of breast cancer from Prempro.
According to New York Attorney General Eric Schneiderman, who led the probe, Wyeth got doctors to push the drug for unapproved uses, relying on “misleading presentations of data.”
The above is only a partial list of the fraud, corruption and criminality of Pfizer. There are other examples of Pfizer unethically testing pharmaceutical products in the world’s poorest nations and participating in other criminal actions.


Whistleblowers expose Pfizer COVID vaccine trials
While Pfizer’s CEO believes that it is criminal to question the integrity of his pharmaceutical company, multiple whistleblowers have already come forward, exposing the lack of integrity of Pfizer’s COVID-19 vaccine trials.
Leading medical journal The BMJ published a report exposing faked data, blind trial failures, poorly trained vaccinators and a slow follow-up on adverse reactions in the phase-three trial of Pfizer’s gene therapy shots.
When the whistleblower reported her concerns to the U.S. Food and Drug Administration (FDA), she was fired later the same day because she was “not a good fit.” The FDA never inspected the clinical trial site of the whistleblower complaint.
Another whistleblower named Maddie de Garay volunteered for the Pfizer trial for 12 to 15-year-olds. 24 hours after her second dose, she was in an emergency room.

She is now in a wheelchair, requires a feeding tube through her nose and is still suffering 9 months later. Maddie was 1 of 1,131 children in Pfizer’s clinical trial for children aged 12-15.

Attorney Aaron Siri and a group of more than 30 scientists, medical professionals and journalists asked the FDA for “all data and information for the Pfizer vaccine,” including safety and effectiveness data, adverse reaction reports and a list of active and inactive ingredients.
The FDA managed to consider all 329,000 pages of data and grant emergency approval of the Pfizer vaccine within just 108 days but is now asking for 75 years to fully release that information to the public.

Siri wrote on his Substack:

“So, let’s get this straight. The federal government shields Pfizer from liability. Gives it billions of dollars. Makes Americans take its product. But won’t let you see the data supporting its product’s safety and efficacy. Who does the government work for?” 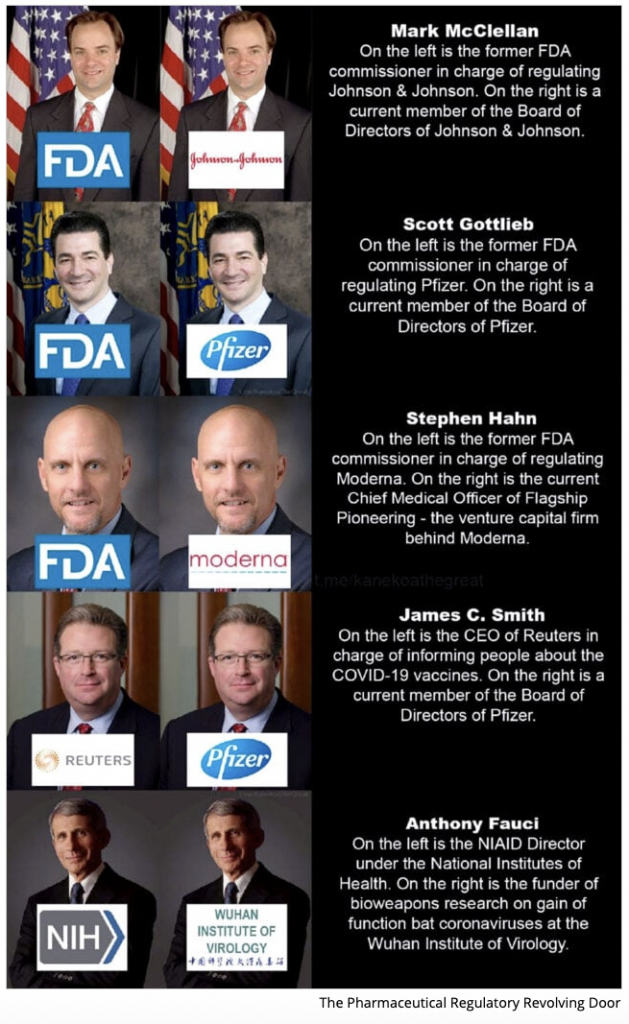 In a December 2021 interview, World Bank President, David Malpass, said that Pfizer will not give mRNA shots to countries where they face legal liabilities for side effects.
Malpass shared:
“Pfizer has been hesitant to go into some of the countries because of the liability problems, they don’t have a liability shield.”
This clearly shows that Pfizer is not operating from some moral high road for the betterment of society. This is about profit, and the people of the world have every right to question the integrity of Pfizer based on its criminal history and current actions.
As I have written in previous articles, this is still a pandemic of the untreated because captured regulatory agencies refuse to provide early treatment protocols featuring cheap and effective off-patent medications.
How much of this refusal to treat patients is due to Big Pharma’s leverage over captured regulatory agencies?
And, by all accounts, the COVID-19 mRNA gene therapy shots are failing to stop the spread worldwide. Still, Pfizer expected to bring in $33.5 billion in vaccine revenue in 2021 and expects even more profits in 2022 if it can continue to convince the world that its pharmaceutical products are the saviour of humanity.
The download
“The Joe Rogan Experience” “#1747 — Dr. Peter McCullough”: Dr Peter A. McCullough, M.D., MPH, is a board-certified cardiologist who has testified before committees of the U.S. and Texas Senate regarding the treatment of COVID-19 and management of the ongoing pandemic. He joins Joe Rogan to discuss early treatment, vaccines and all things COVID-19 in the most important podcast episode of 2021. Watch here.
“Doctor’s Orders” — a documentary by DefendingTheRebuplic.org: Defending The Republic has produced a documentary, “Doctors Orders,” on COVID-19 issues. The documentary features Dr Vladimir Zelenko, Dr Bradley Meyer, Dr Ted Fogarty and other medical professionals talking about how our medical system has failed the American people by blocking safe and effective early treatment options for COVID-19. Watch here.
Dr Robert Malone puts out a statement against vaccinating healthy children: Before you vaccinate your child, which is irreversible and potentially permanently damaging, find out why 15,000 physicians and medical scientists around the world signed a declaration publicly declaring that healthy children should NOT be vaccinated for COVID-19. On behalf of these M.D.s and Ph.D.s, Dr Robert Malone, who has devoted his career to vaccine development, provides parents a clear statement outlining the scientific facts behind this decision. Watch here.
“Huge new study shows ZERO Covid deaths among healthy German children”: German physician-scientists reported Monday that not a single healthy child between the ages of 5 and 18 died of COVID-19 in Germany in the first 15 months of the epidemic. Not one. Serious illness was also extremely rare. The odds that a healthy child aged 5-11 would require intensive care for COVID-19 were about 1 in 50,000, the researchers found. For older and younger children, the odds were about 1 in 8,000. Read here.
“More Than 400 Studies on the Failure of Compulsory Covid Interventions”: The great body of evidence shows that COVID-19 lockdowns, shelter-in-place policies, masks, school closures and mask mandates have failed in their purpose of curbing transmission or reducing deaths. These restrictive policies were ineffective and devastating failures, causing immense harm, especially to the poorer and more vulnerable within societies. The research indicates that mask mandates, lockdowns and school closures have had no discernible impact on virus trajectories. Read here.
Originally published on Kanekoa News Substack page.
The views and opinions expressed in this article are those of the authors and do not necessarily reflect the views of Children’s Health Defense.
© [01/09/23] Children’s Health Defense, Inc. This work is reproduced and distributed with the permission of Children’s Health Defense, Inc. Want to learn more from Children’s Health Defense? Sign up for free news and updates from Robert F. Kennedy, Jr. and the Children’s Health Defense. Your donation will help to support us in our efforts.
Read Also: